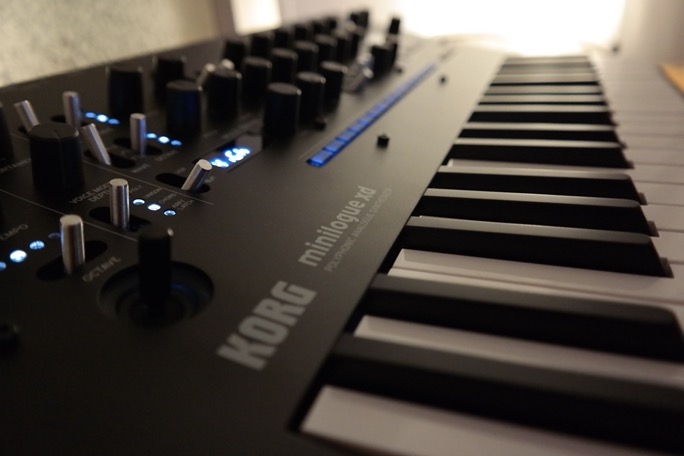 The minilogue xd shares the form factor with its predecessor minilogue, though featurewise it is more a shrinked prologue than an enhanced minilogue. Compared to the latter, additions include a stereo output, an improved effects section, the inclusion of a third digital oscillator (equal to the prologue), a changed filter design (much closer to the prologue than to the original minilogue), and a joystick controller.

As with the prologue, the digital Multi Engine provides a noise generator and a VPM/FM oscillator. Additionally there are 16 slots for third party oscillators, with the Waves oscillator preinstalled. Further oscillators are provided e.g. by hammondeggs or Sound Mangling (Tim Shoebridge) or can be created by the user using the publicly available logue SDK.

The device gets shipped with 200 of the 500 memory slots populated with presets. Korg didn’t port the additonal soundsets of the original minilogue to the xd. An open source converter exists with loguetools, but since the machines differ, the results are not perfect and require manual adjustments.

For keyboardist, there are drawbacks. In case the mini keys are to small, get the module version and connect it to a full size keyboard. A painful omission is the lack of sustain and release for the envelope generator. The latter actually exists, though it is not exposed to the user interface. Instead, the decay time is used as release time. The former, however, is definitely missing. This is painful, since it is essential for dynamic sounds like Brass emulations. A mitigation was to control the cutoff frequency by velocity. Unfortunately this cannot be done with the minilogue. The xd’s keybed does not support aftertouch. Interestingly a recent update allows it to control several parameters, including the filter’s cutoff. But velocity control is still missing. Keyboardists may be served better with the prologue.

Users who want to use it in conjunction with a digital audio workstation (here’s a matching video of Korg) may either prefer the original minilogue (since threre are much more downloadable presets available). The xd may be a better choice in case one wants to use it for bass sounds (due to the changed filter) or the Multi Engine is of interest.