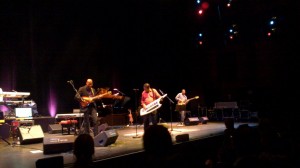 After Lee Ritenour the next master did me a favour and came close enough to make me spend some money. His works do not exactly fit my taste, so I mainly know his most popular works. He has always been a very progressive musician (remember »Future Shock«?) and he played with some of my favorite artists like Joe Zawinul and Chick Corea. Baden-Baden is just about 40km south, and as the synth addict and fusion enthusiast I am, attending the concert was a must.

The lineup consisted of Herbie Hancock (grand piano, Korg Oasys), Kristina Train (vocals, violin), James Genus (bass), Trevor Lawrence (drums), Lionel Loueke (guitar) and Greg Phillinganes (Korg Oasys, Korg Triton, vocals). His current project is called »The Imagine Project«, but of course he could not resist to play some of the hits (like Cantaloupe Island) that made him popular. The way he puts different influences and styles together is pretty interesting. Plus it is a great joy to see how he treats the piano and his synthesizers. He also used a Roland AX-Synth twice, really excessively during the last tune.

A great concert indeed. There are some further tour dates nearby during the next couple of days, so don’t miss your chance.