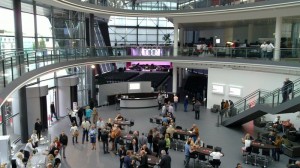 »Return to Forever« probably is the most famous fusion band this planet has ever seen. I remember the days of my youth when I programmed my Waldorf Microwave synthesizer to get some Corea-like sounds and playing along their recordings.

Fortunately there was a reunion tour in 2008 where I’ve seen them performing live at Gruga-Halle in Essen. The 2008 lineup consited of Chick Corea, Stanley Clarke, Al Di Meola and Lenny White. 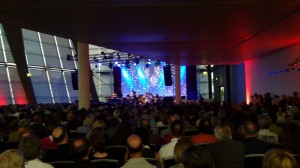 Corea on the left hand side was almost invisible (though not inaudible), hidden behind his Yamaha Motif and Moog synthesizers. Ponty was also almost invisible, as the tall Clarke at the center of the stage just dominated everything :) . Gambale followed right of Clarke, and White’s drums have been placed on the right hand side of the stage, opposite of Corea’s keyboard towers.

BTW: Hey, Lenny, I already knew your boy-group joke. Time to invent a new one, just to avoid boredom of your colleagues ;-) . 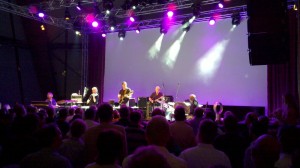 Ponty and Gambale both fit the band perfectly, and the mixture of playing old tunes combined with some improvisation and soloing was just right.

Though Corea might be the musical director behind the scenes, Clarke was the master this evening, dominating the show with several solos. Stanley’s capabilities on the bass are simply incredible. And he’s fast. Really fast. Have you ever heard a bass sounding like a machine gun, and have you ever heard a speed race between a bass and a violin player?!?

At the end of the show, there was one bonus set, and they turned the volume up completely. Again it was Clarke who controlled everything – the guy behind the mixing console, his co-musicians, and the audience. 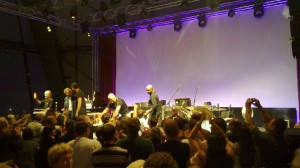 This band is a must-see for every musician. It’s not enough to listen to their recordings. You must see them performing live. Thanks a bunch for the nice evening. This was the most enjoyable concert of my life – til today, at least :) .