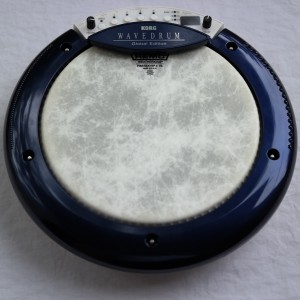 I try to play the Wavedrum frequently. I mainly use the finger tips for playing rather than the palm (or even sticks). Unfortunately I did not pay attention to my finger nails, which scratched the original head quite heavily.

As a consequence, I needed to replace the head. As advertised by Korg, I’ve chosen the Remo Ambassador Fiberskyn3 10“ (model FA-0510-00). Replacement is simple. Just remove the 5 screws, turn the rim to the right (gently, so that the cable between the rim and the body does not get damaged), replace the head, put the rim in place and insert the five screws. The manual describes how to tighten them and how to calibrate the sensors.

While calibrating the rim sensitivity, one may be tempted to set the low value to 0 instead of something like 7. This leads to some hiss coming out of the Wavedrum though.

The next couple of days will show whether the Remo is more resistent than the original head :) .