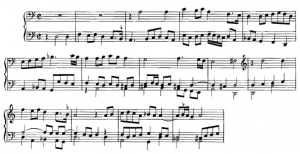 As I resumed playing classical pipe organ music about a year ago, one of the pieces I used to get a grip on it was a »Fantasia« (in the key of »c«) by Abraham van den Kerckhoven. I like playing it using a »Fond d’orgue« registration. Sheet music can be found at page 57 (75th PDF page) at the international music score library project, imslp.org.

One of the ranks I like most in baroque french pipe organs is the Cornet. Actually it emulates a Zink. It usually is not placed at the same level of the other pipes. Instead it is raised so it can speak directly through the front pipes of the instrument for a more direct sound. It provides 5 pipes per key, emulating the natural harmonic series. Usually it is only present in the upper half of the keybed, while the bass notes are silent. It serves two purposes. Firstly it supports the reed pipes in the upper register in registrations such as the »Grands Jeux«. Secondly it is used as a solo stop, usually mixed with a Bourdon 8′ and a Préstant 4′ and accompanied by a mix of a Montre 8′ and a Bourdon 8′ of the second manual.

I was looking for a nice piece using such a registration. I stumbled upon a further Fantasia of Kerckhoven, this time written in the key of »d«. Notes can be found on page 69 (PDF page 87) of the abovementioned document.