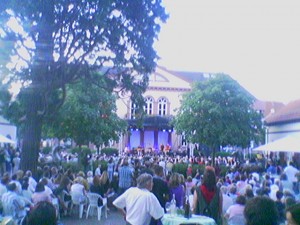 I’ve just been at a open air concert of Biréli Lagrène in Herxheim. It was a perfect warm summer evening at a perfect location. They locked the main street and put the stage directly on the street:

The first set was merely like a traditional jam session. The second set, however, was exactly my taste. Biréli playing the guitar is pure fun to listen, and the rest of the band also did a very good job. My only complaint is that the keyboards have been a bit too low, so it was difficult to follow the playing of Michael Lecoq. He played a Nord Stage, a Nord Lead 2 and a Korg Triton Extreme. I’ve played the Nord Stage every now and then at the local trumpet store. It sounds marvellous, but I’m not comfortable yet with its user interface.

Thanks to HMK for the hint BTW.