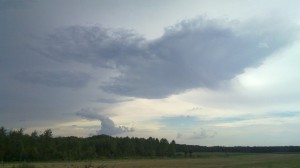 Since it was obvious that I need a more reliable bike, I’m looking for the right device. A friend once sent me a PDF of a very attractive gadget. I also considered other options, but the more I was looking for alternatives, the more I wanted exactly this one.

Surprisingly it was not that easy to find a dealer who has it on stock, at least at the right size. One offered to get one for his shop which I then could test. Fair enough. He anticipated that it would take four up to five weeks. I didn’t get any notification by him after those five weeks, and each time I called and asked he told me it will surely arrive during the next couple of days, at the beginning of the next or until the end of this week. As the bike finally arrived after eleven weeks we didn’t manage to agree in the contractual details. Meanwhile I had contacted other dealers, but to no avail. I decided to give up, considering the biking season was almost over and I still have another bike.

Last week, however, I decided to start a last attempt. I got a list of all dealers inside a radius of 30km from the manufacturer’s web page and sent them all an electronic message. I got some negative replies, but surprisingly the dealer next to me wrote he had one on stock and would be glad if I dropped by. They had time, they patiently answered my questions, they avoided to use the typical marketing speech, I got the occasion for a trial trip and finally they offered some modifications I desired at such a price tag I could not resist. They did the modifications instantly while I answered their questions concerning openstreetmap.

At 5PM I was on the road with my latest acquisition, carrying some tools to adjust the machine to my likings. Problem solved.

The following section is for all those perverts who like well done tech stuff, especially when it comes to bicycles. Get the tissues ready. All others, please leave us alone :) .

The bike is from Gudereit, a manufacturer from Bielefeld, Germany. The model is known as LC-R and available for a couple of years now. The technical details are adjusted each year. Compared to earlier models, the chain now is protected by a Hebie chain glider, and the chain tightener of former releases luckily has disappeared. The frame is a aluminium “smooth” welding frame. The bike has no suspension system and its weight is about 14,5kg (sorry for the bad picture, I still need to learn how to use the N900’s camera): 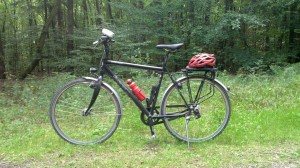 The light is a Busch & Müller Lumotec IQ Cyo senso plus LED, including a parking light and an auto switch. It’s really bright. I used an auto switch on my previous bike, and I don’t want to miss it. 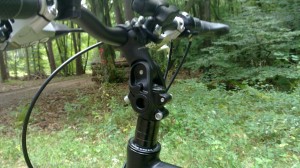 The stem was too thick to mount the
Otterbox for my N900 mobile computer centered. I now mounted it to the handlebar excentrically, while the balls and crank allow to position it at the center of the handle bar: 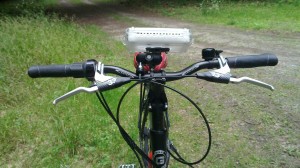 Otterbox to protect an N900 smartphone

The front hub hosts the dynamo, a Shimano DH-3N80. Additionally, the dealer replaced the quick clamps by a system called Pitlock. Also pay attention to the eyes of the spokes: 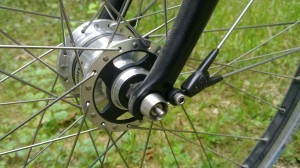 The pedals are different on either side. This way one can use the bike both with normal shoes as well as with specialized biking shoes: 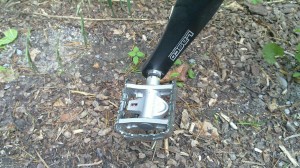 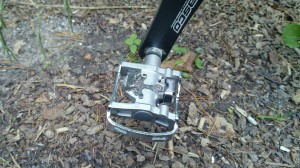 I hope the bottom bracket lasts longer than the one of my previous bike. Unfortunately I have no information which one it is: 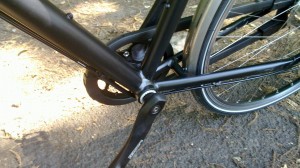 The chain is protected by a chain glider. I’m not a big fan of it yet. It’s rattling a lot, and I’d prefer a machine which quietly does its job: 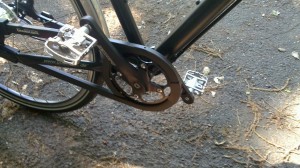 The brake is a Magura HS-33 rim brake, based on a hydraulic system. This picture has been taken after a couple of kilometers, so some dust already has settled. Note the quick lock, which makes toolless dismantling of the brake possible: 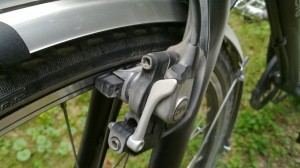 Here’s the brake lever of the Magura. Frankly, I dislike the ad stickers applied to all parts of the bike: 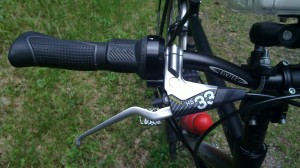 The heart of the bike’s engine is a Rohloff Speedhub with 14 gears. That’s comparable to a 27 gears derailleur. It’s filled with oil which needs to be replaced once a year. I was surpriced by the noise it makes under certain circumstances, but anyway, it’s the most reliable bicycle gear money can buy, and there’s no alternative: 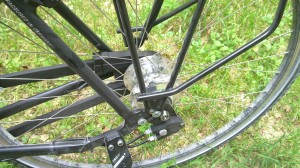 One of the details I like most is the special dropout. The position of the wheel is adjusted by two screws, both forced into a dado. Those screws are used to tighten the chain, but remain untouched in case you need to remove and reinsert the wheel. Changing the wheel thus does not require to retighten the chain: 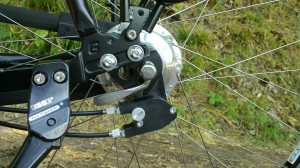 I’m not used to the bike yet, so it’s too early to judge the overall operation and reliability. I’ve seen some pitfalls already, though:

The years passing by will show whether this machine is worth its bucks. Of course I assume it is. Such a bike won’t move alone, so you still have to use you feet :) . And it has its shortcomings as any other technical device as well. The additional fee you pay is for its reliability and durability. And this bike hopefully provides both attributes.