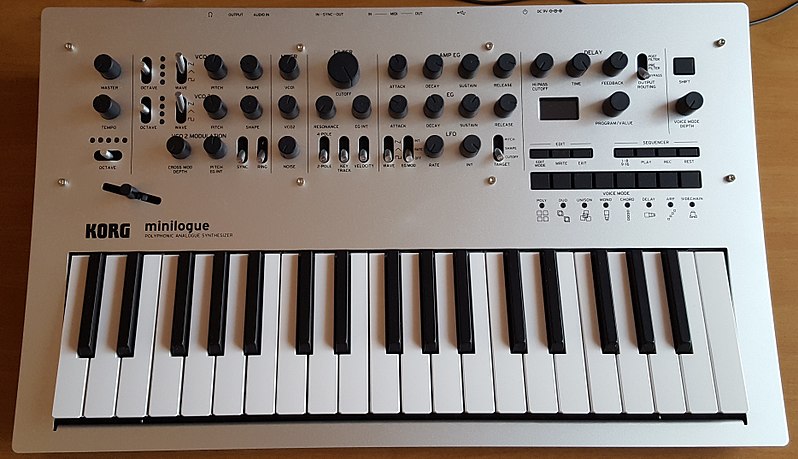 In 2016, Korg released the Korg minilogue. Despite its size (and mini keybed), it is an synthesizer with excellent audio qualities. It still is sold for about 70 € less than its successor, the minilogue xd, which appeared in 2019 (after the release of the flagship prologue in 2018). Surprisingly, it provides features the xd lacks, e.g. the amplitude of the LFO can be controlled by the envelope generator, and noteworthy, the EG is of usual ADSR type, while the xd only provides attack and decay, no sustain or release.

The minilogue’s filter sounds completely different compared to the xd. Especially the resonance lets one create nice sweeps the xd cannot do this way, while it notably thins out the lower frequencies, which the xd doesn’t.

The device gets shipped with 100 presets populating its 200 memory slots. Korg provides seven further soundpacks as free downloads. Further artists have created soundpacks, and posted demonstrations of the presets on Youtube. One of them is Adam Borseti, who showcases some of his presets in this video. They are currently available via Reverb.com.

The minilogue, the minilogue xd and the prologue are quite similar and provide excellent analogue sound. In case the third user programmable oscillator of the xd was of little interest, I’d still go for the original minilogue.