If you remember a little latin, you might know what »Anus Mundi« means (a vulgar german translation would read as »Arsch der Welt«). Still under the impression of my recent visit to O?wi?cim, Poland, I wanted to get a bit of a clue what life was like in those infamous german concentration camps. 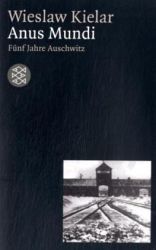 The author, Wieslaw Kielar, was imprisoned as one of the first 300 inmates sent to Auschwitz (he become number 290) in 1940. Though being an eye-witness, he wrote the book in a rather factual manner. He describes the various characters of people found in the camp, and reports about the daily struggle for survival. Cruelty, death and corpses were part of the camp life as was malnutrition. Kielar does different jobs and knows about various aspects of the camp, even selections, liquidations and the mass extermintations.

If you read the book, you cannot imagine that Kielar survived 5 years in such camps where your personal exitus accompanies you day by day. On the other hand, Kielar also shows how some inmates managed to get a little »freedom« inside the camp, which helped them to survive.

It was an excellent read, though 416 pages (german edition) densely populated with wee small letters waited to be processed. If you are capable of understanding a little german, Michael Jack’s german review might be of interest for you. During the next days, I’ll read a book of an other inmate of the Birkenau camp. I’ll post about it after I read it.