Ages ago I tried to cope with the EG2 of the Kronos’ software implementation of the MS-20. Meanwhile there are hardware reissues of at least two manufacturers, KORG and Behringer. The behaviour of EG2 is consistent to the original machine, which makes some users scratch their heads.

Many synthesizers provide two ADSR envelopes, one for the VCA (volume contour), and one for the VCF (which most often is a low pass filter).

For the VCA envelope, you’ll not find a parameter “Envelope amount”. The envelope usually starts with the VCA fully closed (except there’s a parameter “Initial gain” and set to something different than 0). After a key press, the envelope will fully open the amplifier at the end of the attack time, then fall down to sustain level and slowly close the amp after the key was released. 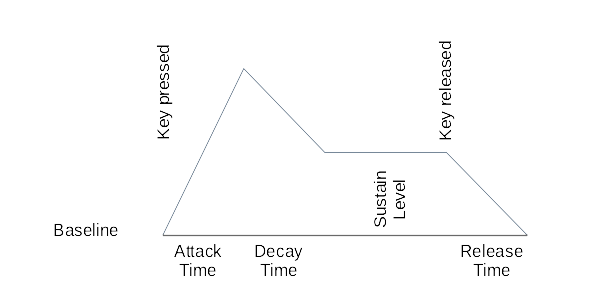 The MS-20 features an additional parameter “Hold time”. It essentially prolongs the sustain level after the key was released, similarly to pressing down a hold pedal for a couple of seconds. I’ll leave this parameter alone for now, so what remains is an ordinary ADSR envelope.

EG2 is always coupled to the VCA and behaves exactly as described above. It is not possible to decouple this connection and use EG2 for the filters exclusively, e.g. by patching EG1 to the “Initial Gain” jack. This behaviour may cause the first confusion for many users.

Now for the filters. Either of them provides a knob “EG2/Ext” which allows to control the amount of envelope to be applied to them. 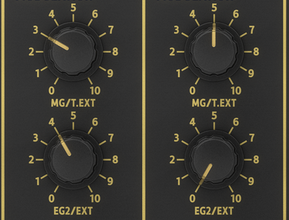 ADSR envelopes applied to a filter by an amount knob usually behave very similar to the envelope applied to the VCA, except for two little differences. The envelope does not open and close the filter completely. Instead, it affects the filter cutoff only by the amount as set by some controls like the ones depicted above. Usually it does so starting at the currently set cutoff frequency as the baseline. Any sustain level greater than 0 thus shifts the cutoff frequency by a certain amount as long as a key is pressed.

The MS-20 behaves differently. From the original manual:

The EG-2 output is internally patched to the VCA so that changes in volume over time will occur to sounds according to the EG-2 control settings. In addition, another EG-2 output is sent to the Filter Modulation controls (EG-2/EXT) so as to modulate the VCF's cut-off frequency. In this mode the filter's "steady state" is the Sustain Level. The filter's cut-off frequency will start below this level initially, will rise above the Sustain level during Attack cycle, will fall to the Sustain level, and then will fall below to the initial level again following trigger release. 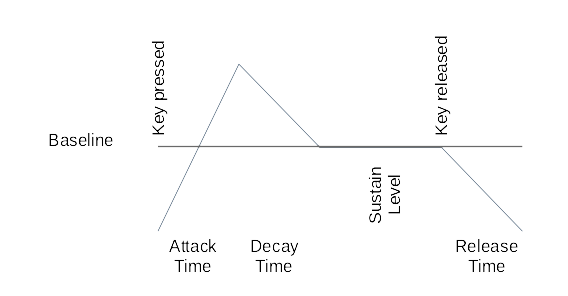 This special behaviour still was easy to adopt. What makes it difficult to cope with is the fact, that EG2 still is coupled to the VCA. So here’s a little résumé for all of us who approach the MS-20 with the mental model of our usual comfort zone:

To circumvent the issues, EG1 could be used for the cutoff instead. As soon it gets patched via the patch panel, EG2 gets decoupled from the filter. However, EG1 is quite limited, since it is missing decay and sustain.

A further solution is to use an envelope generator of another synth. Maybe some eurorack modules, or another synth wich has CV outputs from its envelopes. So does the Pro-1. I connect both to the MIDI keyboard, turn down the volume of the Pro-1 and use its filter envelope to control the cutoff of the low pass filter, and its amp envelope to control the high pass filter. This gives me much better control over the filter of the K-2 than the device itself provides. Problem solved :) .