After excessively testing the Kronos, I’m completely overwhelmed. I didn’t expect it being that great. Though the grand and electric piano, the organ and string modelling engines already provide a more than pleasing playground, I’m especially impressed by the AL-1 analog modeling and MOD-7 FM engines.

Despite the complexity the device runs relatively stable. Some weird behaviour, requiring a reboot, may happen after hours of programming work, which IMO is not a major issue. I got the device to crash, though, when importing and playing some organ soundfonts like Jeux 1.4 from hammersound.com.

The fan was very noisy and audible from a distance of at least 15 feet. Obviously its vibrations have been amplified by the base panel made of hard masonite. My dealer first tried to decouple it from the chassis using some foam, but to no avail. He finally replaced it by a model with similar specs. It’s still audible, but I barely notice it when sitting in front and programming the machine. I’m very grateful for the great work they did. 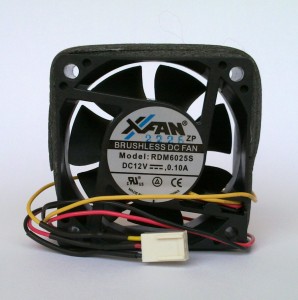 I replaced my DIY-welted stand by the K&M 18810, which is rather solid and provides enough room for the legs and pedals. IMO its assembly classifies it as a stand for stationary use, not being made for stage nomads.

I’m still after a pedal block compatible with the Kronos with two (or three) integrated (half-damper) switches similar to the ones of Roland and Nord shown below. If possible, an integrated swell respectively expression pedal would be great. In case someone can share some pointer, I’d be interested. 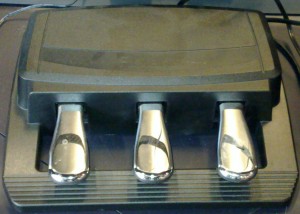 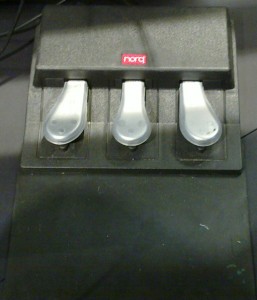 The factory CX-3 organ presets use the joystick to switch the rotary speaker’s speed. In case you want to optionally use the footswitch, assign one of the AMS mixers to the speed parameter, and provide both the joystick’s Y-axis and the footswitch to this mixer’s inputs.

The Kronos, son of the OASYS and kind of grand son of the Z1, IMO is an unrivaled digital piano, organ, and synthesizer. I already spent hours playing the outstanding grand piano emulations and programming the AL-1 and MOD-7 engines.