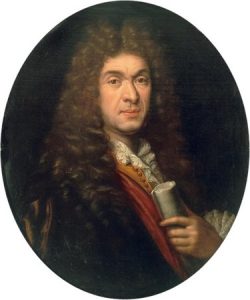 Giovanni Battista Lulli was a french baroque composer of significant influence. I twice heard the passacaille of his opera Armide, Acte 5, Scène 1 (LWV 71, 1686) being played at the Dubois organ at Wissembourg. The first one was Roland Lopes (August 5, 2012), the second was Jürgen Essl (July 20, 2014). An orchestral version is available thanks to the Chœur de chambre de Namur (including Scène II).

I did a transcription of Scène I for organ. The archive contains a ready to use PDF (including my fingerings). Additionally it also contains the Muse Score source files. Unfortunately the latter one needs adjustments when opening it in more recent versions of Muse Score. Feel free to edit it :) .

I play it using a Grands Jeux registration, which results in a much more aggressive sound than the aforementioned orchestral version. I also play it using three keybeds.